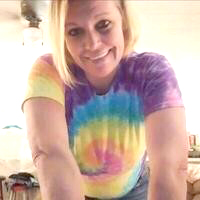 Funeral services for Amanda Kay Clark were held Dec. 28, 2022, at Shalom Baptist Church in New Hebron, with Rev. Mike Grenn officiating. Interment followed in the New Hebron Cemetery. Mrs. Clark, 46, passed away Dec. 25 at her residence in Natchez.
Mandy was born on Nov. 29, 1976, in Brookhaven to William Edward and Marilyn Brumfield Mullins. She had previously worked as a licensed practical nurse at the Jefferson Davis County Hospital in Prentiss. Mandy had a great passion for the outdoors and especially loved long walks along the creek. Having an appreciation for the simple things of nature, the family relates that she had a vast collection of unusual rocks and driftwood that would catch her eye. These simple treasures brought a lot of joy to her but most of all, Mandy loved her girls very much and especially her dog, PeeWee Herman. She was a member of Shalom Baptist Church.
Serving as pallbearers were Charles Prestridge, Joe Prestridge, Cameron Welch, Carson Welch, Caden Welch, and Casey Hunt.
Honorary pallbearers were Colby Mullins, Anthony Mullins, and Chad Hodges.
Mandy was preceded in death by her brother, Will Mullins, in 2010.
Her memory will forever be cherished by her three daughters, Taylor Speights (Sydney), of Gulfport; Josie Clark and Emmy Clark, both of Monticello; two sisters, Sandy Hunt and Cindy Welch, both of New Hebron; her mother-in-law, Bonnie Clark, of Monticello; and her parents, William and Marilyn Mullins, of New Hebron. Mandy also leaves behind a host of nieces, nephews, and cousins.