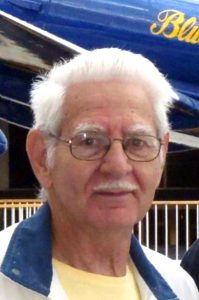 harles “Charlie” Barkley passed away at his residence in Monticello on April 24, 2022. He was born Sept. 2, 1938, in Ellisburg, New York, to the late Harold Barkley and Nina Backus.
Visitation will be held from 5 until 9 p.m., Wednesday, April 27, at Wilson Funeral Home in Monticello. Funeral services will be held at 2 p.m., Thursday, April 28, at Wilson Chapel, with burial to follow in the Monticello Municipal Cemetery.
He was preceded in death by his wife of 46 years, Betty; and two brothers, Allen Barkley and Ricky Williams; sister, Carol Foss; and granddaughter, Allie Barkley.
Charlie served in the Navy and was attached to fighter wing Attack squadron VA 46, “Fighting Clansmen,” from 1958-1962. He enjoyed gardening, dancing, and square dancing. He was president of the Mississippi Square Dance Association for several years. He and his wife, Betty, were co-founders of Dixie Dancers square dance club. They were very active in their dancing clubs and danced regularly on the TV show “Hour of the ‘50s.”
Charlie, with family in tow, moved from Jacksonville, Fla., to Silver Creek in 1968 and worked at the Monticello paper mill until his retirement there in 2004.
Survivors include his sons, Earl Barkley (Sissy) and Kenneth Barkley (Lea); grandsons, Cory Barkley, Victor Barkley, Chris Barkley; and granddaughter, Amy Jackson (Matt); along with a host of loving friends and family.
Pallbearers will be Kenneth Barkley, Nick Dittlinger, Craig Mears, Bill Robichaud, Bobby Selman, and Marty Martin. Honorary pallbearers will be Cory Barkley, Victor Barkley (brother), Victor Barkley (grandson), Chris Barkley, George Kirby, Marvin Swindle, and Jimmy Laws.