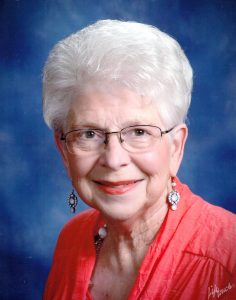 A memorial service for Joan Russell Jolly was held March 17, 2022, at Monticello Baptist Church. Riverwood Family handled the arrangements.
Mrs. Jolly, Miss Joan, or JaJa, as she was nicknamed by her grandchildren, went to be with her Lord and Savior Jesus Christ shortly after noon on March 15 at the age of 87 with her loving family by her side. She was born Jan. 31, 1935, to Isaac Earl Russell and Christi Lou Johnston Russell.
She was a lifelong resident of Monticello and through the years, she was involved in many civic organizations, including the local Twentieth Century Club where she served as president. She owned and operated the local Ford dealership along with her husband, and later her children, for almost 40 years, with great integrity. As an active member of her beloved Monticello Baptist Church, she served faithfully for many years as a choir member, in mission organizations, and for 40 years as the secretary for Sunday school. She also served as an alderperson for the Town of Monticello for several years and the Copiah-Lincoln Community College Board of Trustees.
Over and above all the service to her community and her church, she was a wonderful wife, mother, and grandmother. The life she led was a loving example of how a Christian woman should live. As she raised her children, she made absolutely sure that the family was in church every Sunday and as an encouragement to get them up and ready, she prepared pancakes almost every Sunday morning. She continued this practice of encouraging church attendance long after her children were grown.
Perhaps the greatest testament to her strength was displayed during 1987 when she suffered the loss of her son, brother, and husband within a four-month period. Through it all, she was a rock and leaned on our Lord to see her through.
She was a great cook and Sundays after church at her home was a frequent gathering place for family time, which was of the utmost importance to her. Whenever her children or later grandchildren were involved in any activities, you could always count on her attendance for encouragement and only encouragement.
It would take a document far longer than an obituary to properly honor a woman the likes of Joan Jolly.
She was preceded in death by her husband, Thomas E. Jolly; son, Steven W. Jolly; and brother, Robert Russell.
She is survived by her son, Thomas E. Jolly Jr. (Patricia); daughter, Karen Jolly Hill (Aubrey); sister, Annette Russell Brister (Tom); five grandchildren, Anna Blythe Jolly Guess (Jake), Thomas E. “Tripp” Jolly III, Miles Hill (Taylor), Meghan Mullins (Keith), and Mallory Russell (Matthew). She also leaves seven great-grandchildren as well as other loving family members and friends.
Memorials may be made to Monticello Baptist Church, 700 East Broad Street, Monticello, MS 39654.