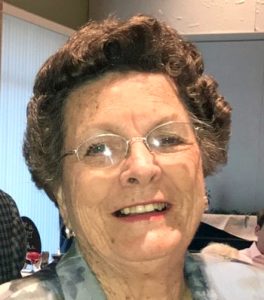 Sammie Marjorie Carr Smith was born in Lawrence County on Jan. 25, 1934, to Sam and Audrey Carr and grew up in the New Zion community west of Monticello. She was the youngest of three children. Her dad worked on wells while her mother worked the garden. It was at New Zion Baptist Church that Sammie began her life of faith in Jesus. She passed away peacefully the morning of Oct. 8, 2021, surrounded by her family and sounds of hymns played on piano.
Upon graduation from Monticello High School, Sammie enrolled at Copiah-Lincoln Junior College, where she met Shirley Smith, four years her senior, upon his return from active duty in the Korean War. Following graduation from Co-Lin, Shirley started his pursuit of a degree in agriculture education at Mississippi State University while Sammie began her degree in English at the Mississippi State College for Women. This 30-mile separation lasted only one semester, though, as Sammie transferred to Mississippi State in January 1954. Sammie and Shirley were married on Aug. 29, 1954.
Following their graduation from Mississippi State in 1955, Sammie and Shirley bought their first home in Winona, where Sammie taught English at Duck Hill High School, and Shirley began what would become a 30-year career with the Soil Conservation Service. They were active members of First Baptist Church, where they taught a young marrieds class, and Shirley sang in the choir. During their 7-year stay in Winona, Sammie also gave birth to her first of two boys, Stephen Carr Smith.
In 1963, Sammie and Shirley moved to Tunica as Shirley continued his work with the SCS while Sammie taught English and served as Librarian at Tunica High School. Staying true to their faith, they joined the Tunica Baptist Church and on Feb. 11, 1964, welcomed their second boy, Stanley Keith Smith.
In August 1970, Sammie and Shirley made their final move as a family to Gulfport, where Sammie spent one year working at East Junior High before beginning more than 25 years as the librarian at Bayou View Junior High School. During this period of time, Sammie completed a Master of Library Science degree from the University of Southern Mississippi as well as overseeing the first library on the coast to computerize its card catalogue. An educator at heart, Sammie believed strongly in the value of education and its impact upon her own life.
Shortly after the move to Gulfport, Sammie and Shirley joined First Baptist Church, Gulfport, where she remained a member for 51 years.
Sammie spent the last 27 years of her life as a widow after Shirley’s sudden passing in 1994. Following her retirement from the Gulfport School System, Sammie devoted her time as a Memorial Hospital auxiliary volunteer and supporting Steve and Stan in their respective careers. She was very close to her two grandsons, Ryan and Case, and was blessed to see them grow into young adults and this past March, to hold her great-granddaughter, Raleigh Marie Smith, born to Case and his wife, Danelle.
Sammie loved the outdoors, especially working in her yard and looking after her flower beds and daylilies. Many afternoons were also spent on the front porch with her neighbor of almost 50 years, Aurelia Hagin, keeping track of the comings and goings in the Greenbriar neighborhood.
She was preceded in death by her mom and dad, Audrey and Sam Carr; brother, Paul Carr; and sister, Pauline Woodward.
She is survived by her sons, Steve Smith and wife, Melinda (Cookeville, Tenn.), and Stan Smith and wife, Susan (Gulfport); grandsons, Ryan Smith (Auburn, Ala.) and Case Smith and his wife, Danelle, and great-granddaughter, Raleigh (Waco, Texas); nieces, Karen Lea (Gulfport) and Nan Caves (Monticello); nephew, Mike Carr (Monticello); the family of Miller and Norma Jean Hammill (Brookhaven) and their daughters, Jennifer Rebich (Jackson) and Melanie Bishop (McComb); and cousin-in-law, Janet Smith (Jackson).
Possibly the greatest gift ever given to Sammie was being able stay in her home of 50 years during the final 10 months of her declining health. This was made possible only by the selfless love and around-the-clock care of daughter-in-law, Susan Smith; niece, Karen Lee; and son, Stan.
A celebration of the life of Sammie Carr Smith will was held at First Baptist Church, Gulfport, on Oct. 12. Burial was at Floral Hills Cemetery following the service. Riemann Family Funeral Home, Gulfport, handled the arrangements.