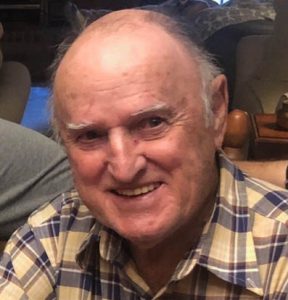 Funeral services for Gordon Lane Rutland, 82, of Ruth, were held June 8, 2021, at Wilson Funeral Home in Monticello, with burial following in Providence Baptist Church Cemetery in Ruth. Bro. Jeffery Conn officiated, with Wilson Funeral Home handling arrangements.
Mr. Rutland passed from this life on June 4 at his residence. He was born on May 30, 1939, in Brookhaven to Ham Hobson Rutland and Loubirta Givens Rutland.
Gordon had been married to Loretta for 63 years. They raised three children and two grandchildren, and were blessed with one great-grandson. He believed in providing for his family. When he would finish one job, he would move on to the next, even if it meant learning another trade. Gordon was a welder, farmer, mechanic, truck driver, and logger. He wasn’t a large man in size, but he could certainly stand his ground. He never like telling anyone “no;” if he could not give you what you asked for, he would tell you not to worry, he would build you one.
Preceding him in death were his parents; son, Timothy Lane Rutland; brothers, Hobson Eugene Rutland, Billy Joe Rutland; and sister, Rosemary Ray.
Survivors are his wife, Loretta Townsend Rutland; son, Gordon Anthony Rutland; daughter, Jennifer Lou Sikes and husband Kevin; grandson, Clinton Gage Brister and wife Rachel; granddaughter, Grace Kathleen Sikes and Dalton Viniard; great-grandson, Noah Gage Brister; and a host of family and friends.