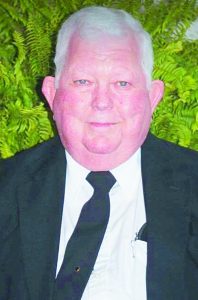 Alvy Earl Dawsey, 83, of Monticello, passed away on Sunday, July 14, 2019 at his residence in Monticello. He was born October 24, 1935 in Opelousas, La. to Alvy Napolean and Clara Johnson Dawsey.
A funeral service was held Wednesday, July 17, 2019 at Wanilla Baptist Church in Monticello, with graveside services following in Wanilla Baptist Church Cemetery. Bro. Jeff Vosbrink and Bro. Lee Faler officiated the services, with Wilson Funeral Home in charge of arrangements.
Mr. Dawsey retired from St. Regis/ Georgia-Pacific after 29 years as a shipping superintendent. He was a member of the GP Catfish Cooking Team. He was head football coach at Jackson, La. from 1961-1964, then served as athletic director and head football coach at Monticello High School from 1964-1966. He was a member of Wanilla Baptist Church for many years where he served as a deacon.
Preceding him in death were his parents, son, William “Billy” Dawsey; and brother, Carl (Bitsy) Dawsey.
He is survived by his wife of 59 years, Rebecca Dawsey of Monticello; children, Kenneth G. “Butch” Dawsey and wife Vicky of Monticello, Mark E. Dawsey and wife Becky of Silver Creek, and Cynthia A. “Cindy” Watson and husband Tony of Monticello; 11 grandchildren and 13 great-grandchildren; brother, William Dawsey and wife Linda of Bossier City, La.; and sister, Mildred Hughes of Monroe, La.