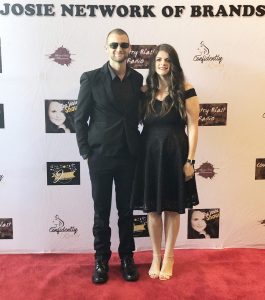 Jayess-based singer/songwriter and four-time Atwood Music Festival performer Cole Powell took home EP of the Year for his 2019 release, Redux II, at the 6th Annual Josie Music Awards.
Held Sept. 5 in Pigeon Forge, Tenn., the JMAs were one of the few major award shows to host a physical ceremony this year, allowing Powell to claim his prize in person.
“Wow! This is absolutely incredible,” Powell said as he began his acceptance speech before revealing he previously believed he “had no chance to win” the 11-nominee field.
One of two nominations of the day for Powell, the EP win marked Powell’s first major accolade in a decade-long career, a fact Powell alluded to later in his remarks.
“I thank all the fans who have supported me. I’ve been doing this for 10 years, and I just thank you for all the support.”
Powell also acknowledged several other Lawrence County musicians, including his wife and singer, Brittany D; Kyle Graves; and fellow Josie-winner, J. F. (Jim) Oakes.
Continuing a ceremony-long trend of expressing faith and camaraderie, Powell closed his speech by thanking God and wishing the audience safety and good health.
An audience capture of the full speech is available online at www.colepowell.net.
The complete ceremony is slated to be broadcast in the Nashville cable market before heading to streaming platforms. Air and release dates will be announced at a later date.