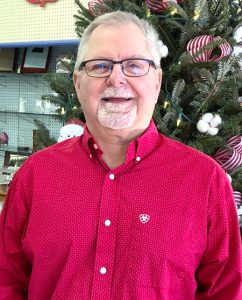 A funeral service for Randal Louis Pennington was held May 13, 2022, at Bethel Baptist Church in Monticello, with interment in Wanilla Baptist Church Cemetery. Riverwood Family handled the arrangements.
Randy was born Jan. 8, 1960, to the late Mr. and Mrs. Robert Leroy Pennington. He was born at the Columbus Air Force Base in Columbus. Over the years, he grew up a military child, alongside his siblings Charlotte Young, Ronald Pennington, and the late Roger Pennington. He grew up living in Mississippi, North Dakota, and Guam before relocating to Sontag, where he spent the rest of his years.
Randy attended Monticello High School, where he graduated in 1979. After high school, he began working offshore in the gas and oil industry where he dedicated 40 years to various oil companies, including Pool, Transocean, and Shell Oil Company.
During this time, he met the love of his life of 37 years, Kim Smith Pennington. After 12 years, they welcomed their only daughter and Randy’s “pumpkin,” Victoria Jayde Russell. In 2018, Randy gained the son he never had when his daughter married Daniel Russell, who shared a love of hunting with Randy.
Over the years, Randy was an avid hunter. He was a member of Triple R hunting club for 37 years and dedicated many years of his life of learning to hunt and teaching his nephews to hunt. Randy loved watching his daughter play softball and spent many years dedicating time to her teaching her the game.
Most importantly, Randy was a Christian. He was a member of Bethel Baptist Church, where he sang in the choir as well. Randy never met a stranger and loved everyone. Most importantly, he loved his wife and daughter with all his heart.
Randy peacefully passed away with his wife and sister by his side on May 9 at Select Specialty Hospital in Jackson. Although his family and friends are saddened by his passing, they know that to be absent with the body is to be present with the Lord.
He is preceded in death by his parents; grandparents, Mr. and Mrs. Robert Pennington Sr. and Mr. and Mrs. Louis Pennington; father- and mother-in-law, Mr. and Mrs. Donald Roger Smith; brother, Roger Warren Pennington; brother-in-law, Kevin Young; and nephews, Elton Lee Maxwell and Hunter Lee Maxwell.
Those left to cherish his memory are his wife, Kim Smith Pennington; daughter, Victoria Jayde Russell (Daniel); brother, Ronald Wayne Pennington (Jennifer); sister, Charlotte Hope Young; sisters-in-law, Samantha Parria and Amber Smith; brother-in-law, Lionel Parria; nephews, Shawn Wesley Maxwell (Crystal), Phillip Edward Maxwell, and Michael Pennington; as well as a host of other nephews, nieces, cousins, and friends.