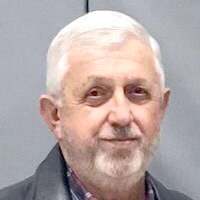 Funeral services for Ronnie Jones were held Feb. 19, 2022, at New Hebron Baptist Church. Interment followed in the New Hebron Cemetery. Rev. Mike Grenn, Rev. Jeremy Knowles, and Rev. Tyler Chavis officiated. Mr. Jones, 74, entered into the eternal rest of his Lord on Feb. 16, 2022, at Southwest Mississippi Regional Medical Center in McComb.
Saulters Moore Funeral Home handled arrangements.
Ronald Wayne Jones was born on Aug. 6, 1947, in Vivian, La., to William Ray and Juanita Pearson Jones. One of the things Ronnie enjoyed most was locating and restoring Ford 8N tractors with his buddies, Charner Little and Jackie Snowden. In addition to woodworking, he also liked watching westerns such as Gunsmoke, Bonanza, and especially those that featured the iconic John Wayne. Of all the things that Ronnie loved to do, perhaps his greatest passion was attending whatever events his grandchildren were involved in, whether it was the baseball and football games of Ryan, Nicholas, and Joshua, or the dance recitals and beauty pageants of Raeanna and Rebekah. He also enjoyed attending the basketball games coached by his brother, Mike. Ronnie will also be missed by Sassy, his dog. Ronnie served on the Board of Aldermen in New Hebron four months shy of 17 years. He also served as a board member for the Ferguson Credit Union since 2015, where he served on the supervisory board three years prior to becoming a board member. He was a third-degree Master Mason and a member of the New Hebron Masonic Lodge as well as a Shriner and also a member of the New Hebron Baptist Church.
Pallbearers were Ryan Williams, Nicholas Cary, Joshua Cary, Hunter McCool, Michael Jones, and Hayden Groover.
Serving as honorary pallbearers were the Myron Lee Sunday School Class of New Hebron Baptist Church, Cameron Woods, Zach Jones, Will Jones, Rhett Sisson, and Ward Sisson.
Mr. Jones was preceded in death by his parents, William Ray and Juanita “Nita” Jones; and also his brother, Bill Jones.
Ronnie’s memory will be forever cherished by his wife, Theresa Jones, of New Hebron; two daughters, Rhonda Jones Cary (Scott), of Petal; Kathy Jones Williams (Danny), of New Hebron; and his brother, Mike Jones (Jane), of Madison.
The legacy of their PawPaw will live on through the grandchildren he loved so dearly. They include Ryan Williams (Kayla), Nicholas Cary, Raeanna Williams (Cameron), Rebekah Williams, and Joshua Cary, of whom he lovingly referred to his PawPaw as Popsie-Poo.