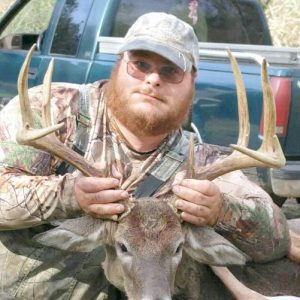 Tom Wayne Case, 40, of Monticello, passed away Feb. 19, 2022. He was born Feb. 7, 1982, in Monticello to Carroll and Lousetta “Lou” Fuller Case.
A funeral service was held Feb. 22 at Bethel Baptist Church, followed by a graveside service in the Bethel Baptist Cemetery. Wilson Funeral Home handled the arrangements.
Tom was a big-hearted person who loved people and would help anyone in need; he especially loved his home of Robinwood. He spent most of his time in the outdoors and enjoyed hunting and fishing; he was also skilled in working with his hands.
He is survived by his father, Carroll Case, of Monticello; one sister, Judy Alexander (Randy), of Monticello; his best friend in the world, Judy “Judee Bugg” King, of Monticello; and his three nieces, Kayla Bay Williams (Ryan), of Brandon; Grace Ann Alexander and Breelee Case Alexander, both of Monticello. Tom also leaves behind those he called his brothers and many other dear friends, including his beloved dog, Rainey.
Tom was preceded in death by his mother, Lousetta Case; and by his grandmother, Ann Strong.