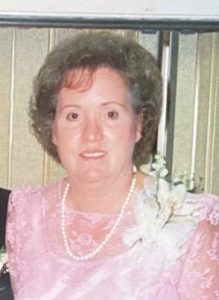 Edna Turnage Armstrong, 89, of Monticello, passed away peacefully on Oct. 21, 2021. She was born Aug. 11, 1932, in Sontag to A.D. and Minnie Daughdrill Turnage.
Graveside services were held Oct. 23 in the Shiloh Baptist Church Cemetery, Sontag. Wilson Funeral Home handled the arrangements.
Edna was a true Southern lady who loved dressing up for church–nails and hair always had to be done–with a passion for hummingbirds and all flowers. Before moving back to Lawrence County, she and her husband resided in Pascagoula, where they were members of Eastlawn Baptist Church. After returning home, she attended Shiloh Baptist Church and Carmel Baptist Church.
She is survived by her daughter and son-in-law, Genice and Greg Garlisch, of Bellevue, Wash.; along with three grandchildren, Gemma, Aimee, and Gregory Garlisch. She also leaves behind one sister, Sue Deare Hyde, of Monticello; and numerous nieces, nephews, and extended family.
Edna was preceded in death by her husband, Osborne Armstrong; her parents; as well as three brothers, A.D. Turnage Jr., Maxie Turnage, and Barry Edward Turnage; and two sisters, Frances Odom and Bonnie Jean Breeden.