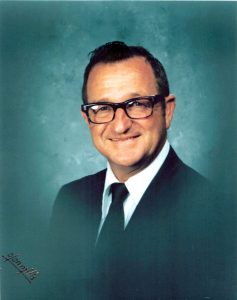 Emmitt Lee Wallace, 89, of Jayess, passed away Aug. 13, 2021. He was born Jan. 2, 1932, in Lawrence County, to Lee and Ancy Bell Creel Wallace.
A funeral service was held Aug. 16 at Topeka Baptist Church. Graveside services followed in Roberts Memorial Cemetery. Wilson Funeral Home handled the arrangements.
Mr. Wallace was a veteran of the U.S. Navy. He served as a pastor for many years in Indiana and continued to serve in interim positions after returning to Mississippi.
He is survived by his daughters, Wanda Joseph (Clayton), of Jayess; and Jan McLean (Jim), of Ridgeland, S.C. He also leaves behind one brother, Claude H. Wallace, three grandchildren, nine great-grandchildren, and one great-great grandson, as well as a host of extended family and friends.
Mr. Emmitt was preceded in death by his parents and by his wife, Mary Smith Wallace; along with two sisters, Vera Mae Mullins and Freddie Ham.