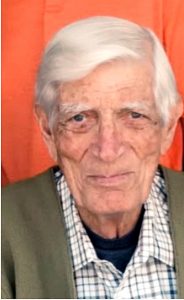 Graveside services for Manford “Pete” Hartzog were held April 1, 2021, at Cliburn Cemetery in Silver Creek. Mr. Hartzog, 84, passed away March at his residence in Silver Creek, with his family at his bedside. Rev. Mike Grenn officiated. Saulters-Moore Funeral Home handled arrangements.
Pallbearers were John Rowells, Rusty Rowells, Bryce Hartzog, Garrett Thornton, Nick Hartzog, and Daniel Hartzog.
“Pete” was born May 9, 1936, in New Hebron to Dailey Hartzog and Ella Martin Hartzog. He was a former lab technician at Lawrence County Hospital, as well as a physician’s assistant for Dr. Pace. Later on, he served as rig and safety training rRepresentative for the Zapata Corporation. Perhaps “Pete” and his wife, Joan, were best known as owners of the Hollytree Farms, where they supplied many happy families with Christmas trees for the holiday season. Pete enjoyed playing chess and was an excellent cook. He immensely enjoyed his family and traveled the United States and Canada on motorcycle with his beloved wife. “Pete” was a member of the Monticello Church of Christ.
He was preceded in death by his son, Rusty Hartzog; and his granddaughter, Amanda Grace Hartzog.
He is survived by his wife, Joan Walsh Hartzog, of Silver Creek; three sons, Rick Hartzog, of Silver Creek; Robert Hartzog (Jewell), of Hattiesburg; and Randy Hartzog (Cheri), of Florence; one daughter, Becky Dawsey (Mark), of Silver Creek; one sister, Lola Peavey, of Silver Creek; 15 grandchildren; and 18 great-grandchildren with one on the way.
In lieu of flowers, memorials may be given to the Bereans Children’s Home, 1180 Berea Trail SE, Bogue Chitto, MS 39629.