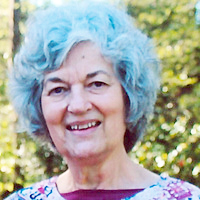 Nancy W. Alford, 79, of Monticello, passed from this life into her heavenly home on Friday, Sept. 4, 2020, at the Lawrence County Hospital. Nancy was born on Aug. 20, 1941, in Burns, to Delton and Willie Mae Carr Winstead.
Nancy, along with her husband, Bobby, were the owners of Office Machine Center in Monticello. She began her retail career at Fantasy Fabrics in Monticello and joined Bobby in the early 80s. She was an excellent seamstress and for many years served the public doing alterations. She sewed on hundreds of patches for the local National Guard. She enjoyed working and worked until the day before her surgery in 2018. She was forced to end her career and has been a resident at the Lawrence County Nursing Center since that time. She enjoyed serving others and providing for her family, whom she always put first. She enjoyed time with her family, especially the grands and great-grands. She was a member of the Monticello Methodist Protestant Church, where she gladly volunteered any where she was needed – VBS refreshments, washing dishes, cooking a meal, or keeping the nursery.
Nancy is survived by her husband, Robert L. Alford Jr. (Bobby); daughter, Denise Alford Weeks and Glen, of Monticello; son, Rob and Josie Alford, of Monticello; and daughter, Diane Alford Mitchell and Mitch, of Gallman. She is survived by six grandchildren, Caleb and Levi Weeks, both of Hattiesburg; Alexis Mitchell Donahoe and Alec, of Olive Branch; Camryn Mitchell, of Managua, Nicaragua; Erika Ann Alford Holmes and Ryan, of Hattiesburg; and Jacob Alford, of Monticello. There are two great-grandchildren, Brister and Mackenzie Donahoe, with another expected in December. She is also survived by a host of extended family, nieces, nephews, and cousins that she loved.
Those preceding her in death were her parents, Delton and Willie Mae Carr Winstead; two brothers, Douglas Winstead and Carl Winstead, and a sister, Kay Winstead Rogers.
We would like to thank those who have helped in her care – Dr. Joe Ward, Dr. Brantley Pace, Dr. Richard Burris, and Mrs. Becky Burris; the staff of the Lawrence County Nursing Center and most recently, the staff at the Lawrence County Hospital.
Memorials may be made to Monticello Methodist Protestant Church.