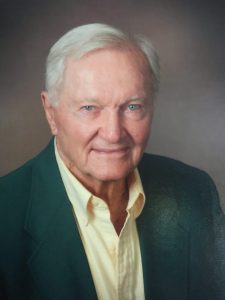 Thomas “Tommy” Franklin Clay Jr., 95, Monticello, passed away on Sunday, May 3, 2020, at his residence. Tommy was born October 1, 1924, in Tutwiler, to Dr. Thomas F. and Delia Fewell Clay. He was laid to rest in the Monticello Cemetery on May 9, 2020.
Memorial services will be held at a later date.
Tommy was raised in the Mississippi Delta in Tutwiler. After two years at Mississippi State University, he hopped a train to California to join the Navy Pilot program. Upon graduation as a Navy Torpedo Bomber, he received his orders to report to Pearl Harbor to join the Pacific war campaign. Before he shipped out to Pearl Harbor, Japan surrendered. He honorably finished his Navy career and attended Millsap’s College, where he was a member of Kappa Sigma fraternity and lettered in baseball and football. While there, he met Martha Lynda Rhymes, and they married in 1949 and had five children.
After graduation from Millsaps College, he worked in the oil field exploration business, Purina Feedmill business, and as an independent life insurance agent. Tommy was a member of the Lions Club, and the Lawrence County School Board for many years during the education of his children. He was a loving husband, father, great-grandfather, brother, and friend. He retired from Mississippi Deferred Compensation Program. Tommy enjoyed spending time with his friends and enjoyed playing tennis and golf. He was an involved member of the United Methodist Church in Monticello, where he held various leadership positions and was active in Sunday school and Choir for many years.
Tommy is survived by his wife of 71 years, Lynda Rhymes Clay, of Monticello; sons, Trace Clay, of Slidell, La.; Scott Clay and wife Kathy, of Arlington, Texas; Mark Clay and wife Vicki, of Monticello; Mike Clay and wife Becky. of Brandon; and Shellie Stassi and husband Jeff, of Deforest, Wis.; eight grandchildren; and one great-grandchild.
Those preceding him in death were his parents and four sisters.
Memorials can be made to the Lawrence County Historical Society – Old Elementary School Project, P. O. Box 521, Monticello, MS 39654.