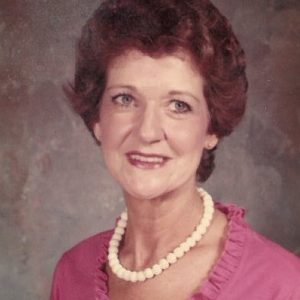 Leona Harrington Courtney, 91, formerly of Monticello, died April 7, 2020, at The Claiborne, in Hattiesburg, after a brief battle with cancer.
A private Liturgy of Christian Burial at graveside was held Friday, March 10 at Our Lady of Perpetual Help Cemetery in Lumberton.
Leona was born in Forrest County, Miss., August 17, 1928. She graduated from Lumberton High School. Leona and her high school sweetheart, Malcolm O. Courtney, were married February 26, 1949, after he returned from the Navy.
Leona helped support the family as Malcolm completed his education at Mississippi Southern College (U.S.M.). Later, she earned her baccalaureate from U.S.M. and began teaching mathematics at Bassfield High School. She continued her education with Masters and Specialists degrees in Guidance Counseling from U.S.M. After completing her Master’s Degree, she became the Guidance Counselor at Monticello High School. In 1997, she retired as the guidance counselor from Lawrence County High School.
Leona had a great love for gardening. She believed “digging in the dirt” brought her closest to God. Her devotion was on full display in all seasons and often was rewarded with “Yard of the Month” honors, occasionally more than one time in a year. Her other devotions were her church, her family, her husband, her children, and her grandchildren.
Leona is survived by her daughters, Paula Fox, of Mobile, Ala.; and Robbin Jones (Vann), of Hattiesburg; sons, Anthony (Barbara), of Clinton; and Gregory (Terri), of Cat Spring, Texas; 12 grandchildren; six great-grandsons; and numerous nieces and nephews. Leona is also survived by a brother, Al Harrington; and a sister, Patsey Boutwell, both of Lumberton.
Mrs. Courtney was preceded in death by her husband, “Coach” Malcolm Otis Courtney; her parents, Leo and Elizabeth Schwierjohn Harrington; and sisters, Mary Alice Fillingame, Margie Landry, Frankie Blackwell, Betty Sckeits, and Reda Stiles.
The family would like to thank the doctors, nurses, and staff of The Claiborne of Hattiesburg, Southern Care Hospice, and First Light Home Care.
The family would like to suggest, in lieu of flowers, a donation to St. Lawrence Catholic Church, PO Box 16, Monticello, MS 39654. Thanks to each of you for all your kind words, thoughts, and prayers.