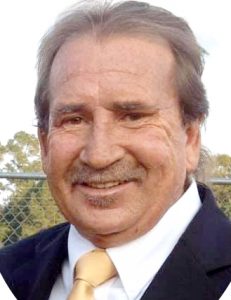 Jerry “Luke” Reid Jr., 61, a resident of McComb, passed away March 29, 2020, at Southwest Mississippi Regional Medical Center.
Graveside services were held Wednesday, April 1 at Providence Baptist Church in Jayess. Rev. Dale Authement officiated.
Mr. Reid was born June 16, 1958, to Jerry L. Reid Sr. and Jorene Waller Reid. He worked for many years as a welder and later as a consultant in the oil industry. He was a man of many hobbies, but his love was for drag racing. He would spend many hours working on his cars. He was capable of building them from the ground up. Luke spent many nights up working and many days racing. He was a true outdoors man. He loved to hunt, fish, and travel to the mountains. He was looking forward to spending time in the Smokey Mountains this year. He loved spending time with his family, tinkering in his shop, and building things with his daughter, Katelyn. He will be missed by those who knew and loved him.
He was preceded in death by his mother, Jorene Waller Reid Searcy.
He is survived by his father, Jerry L. Reid Sr.; his spouse, Debbie Reid, of Jayess; his sons, Justin Reid, of Monticello, and Jerry L. Reid III (Misty), of Ala.; his daughter, Katelyn Reid, of Jayess; a step-daughter, Courtney Ervin (Darren), of Jayess; a brother, Danny Joe Reid, of Brandon; four sisters, Candace Berryhill (Clint), of Smithdale; Lisa Brown (Robby), of Wesson; Kay Kubecka (Steve), of Ark.; and Dianne Vire (Steve), of Tenn.; and seven grandchildren along with numerous other relatives and friends.
Pallbearers were Royce Renfroe, Rocky Parkman, Clint Berryhill, Clayton Reed, Darren Ervin, and Robby Brown.