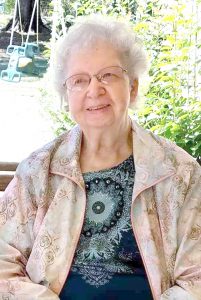 Eleanor “Janette” Alexander, 86, of Jayess, went to be with the Lord Sunday, March 1, 2020, at her residence.
Mrs. Alexander was born March 30, 1933, and was the daughter of Edgar and Eleanor Fleming Steele. She was a member of Jayess Baptist Church for 60 plus years where, in her early years there, she served as a Sunday school teacher. She was a loving and devoted wife, mother, grandmother, sister, and friend and enjoyed cooking and caring for each one of her family members. She loved art, was a talented painter, and enjoyed drawing.
She was preceded in death by her parents and one step-grandson, Tyson Vaughan.
She is survived by her loving husband of 63 years, Denver Alexander; two sons, Glen Alexander and Rhonda, of Culleoka, Tenn., and Eddie Alexander and Cynthia, of Jayess; one brother, Arthur Steele; four sisters, Joyce Elaine Partridge, Edd Rae Nobles and Jeff, Mary Anne Bowlin and Pete, and Ginger Davis and Rich; eight grandchildren, Benjamin Alexander and Mary, Melanie Wallace and Frank, Nathan Alexander, Monica Miller and Brently, Miranda Kennedy and Johnathan, Andrew Alexander, Patrick Alexander, and Franklin Alexander; two step-grandchildren, Christy Stuart and Jesse, and Kayla Graves and Reid; and numerous great-grandchildren, nieces, nephews, family, and friends.
A funeral service was held Thursday, March 5, at Jayess Baptist Church in Jayess, with Bro. James Sanders and Bro. Glen Alexander officiating. Burial followed in Providence Baptist Church Cemetery in Jayess.
Pallbearers were Benjamin Alexander, Nathan Alexander, Andrew Alexander, Brently Miller, Frank Wallace, and Patrick Alexander. Honorary pallbearers were a host of nieces and nephews.