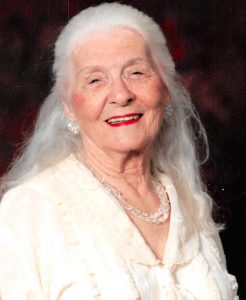 Betty Jo Smith Barham, of Lawrence County, passed away March 4, 2020, at Aston Court Retirement Community in McComb after a brief illness. She was surrounded by family, dear loved ones, and a compassionate staff of caregivers.

She was born in Corpus Christi, Texas, to Fred Sidney Smith and Maudie Dell Harrison Smith on November 10, 1930. She was preceded in death by her husband, Howard Van Barham. She was a member of Shiloh Baptist Church in Sontag.
Services were held at Shiloh Baptist Church in Sontag on Sunday, March 8.
She was a student at the Gilfoy School of Nursing at Baptist Hospital in Jackson from 1949-51, after which she would have a long career as an LPN in patient clinics, hospitals, and as the industrial nurse at St. Regis paper mill in Monticello.
After the death of her husband in 1977, she went on to graduate from Copiah- Lincoln Community College and The University of Southern Mississippi School of Nursing in 1982.
Following graduation, she traveled to Europe to study hospice care at Oxford University in London and later to Honduras as a volunteer mission worker. She would later work for Our Lady of the Lake Medical Center in Baton Rouge, La.
During that time, she applied and was appointed to the Southern Baptist Convention Foreign Mission Board. The assignment she received was to the highlands of Ethiopia to feed, nurse, and minister to the thousands of people who, at that time, were in the midst of what has become a historical famine.
Upon arrival, she fell in love with the people of Ethiopia and would later be known as “Mama Betty” to the many orphans who in turn fell in love with her. After a time, a violent civil war and collapse of the Ethiopian government would cause them to evacuate her beloved Ethiopia.
She spent the following years as a member of a Baptist medical team in many parts of Africa, including Kenya, Tanzania, and Zimbabwe. In 1992, they were allowed back in to Ethiopia where she would help lead the opening of the first Baptist medical clinic in the country.
After returning home, she spent the remainder of her career in home health and nursing home care. She also served as a member of the North American Mission Board. She traveled and spoke to many different groups, clubs, and churches, sharing her great love for the people of Africa and educating them on what their Lottie Moon Christmas offering was doing in that country.
Betty served as the hands and feet of Christ all her life. There’s no doubt it was an unimaginable rejoicing when she finally saw his face.
Her family would like to thank the family and staff of Aston Court, CVSU and third floor staff at Southwest Mississippi Medical Center, and the caring and sincere nurses at Hospice Compassus.
Betty is survived by five children, one sister, and many grandchildren, great-grandchildren and great-great-grandchildren. Her children are Robert Lee Barham, Charlotte Leslie Lea, David Lyle Barham, Perry Lynn Barham, and Bella Lisa Surrett. Her sister is Gloria Smith Ervin of Sontag.
Her grandchildren are Candace, Shawn, Joshua, Perry Jr., Donovan, Derek, and Avery. She is also survived by 13 great, and four great-great grandchildren.
She was preceded in death by her parents; her husband; a sister, Catherine Smith Honea; a baby brother, Harold Ray Smith; a grandson, Dylan Lee Barham; and a daughter-in-law, Ruby Louise McRaney Barham.
Pallbearers include David Barham, Shawn Davis, Joshua Barham, Rob Surrett, Derek Barham, and Donovan Lea. Honorary pallbearers are Terry Rushing, Stephen Garrett, Alex Honea, Johnny Speights, and Richard Ervin.
In lieu of flowers, donations to the Lottie Moon missions offering would be appreciated. Contributions can be made at imb.org.