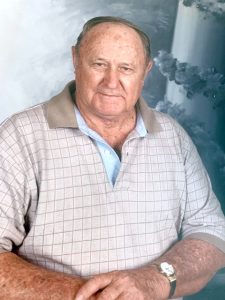 Funeral services for Herman Lee Miller were held Sunday, February 9, 2020, at Wilson Funeral Home in Monticello, with burial following in the Roberts Memorial Cemetery in Jayess. Bro. Creighton White and Bro. Richard Cothern officiated the services, with Wilson Funeral Home in Monticello in charge of the arrangements.
Mr. Miller, 89, of Jayess, passed from this life Thursday, February 6, 2020, at Beacham Memorial Hospital in Magnolia. He was born September 4, 1930, in Jayess to Joe Lee Miller and Velma Wallace Miller.
Herman married Gloris Wallace on March 3, 1948, and was a devoted husband for 49 years until her death in 1997. He farmed the land he was raised on, worked land rigs, and was a heavy equipment operator for Clark’s Construction, which is where he retired from. It was once asked if Herman could complete a particular job with a backhoe. The answer was, “He can comb your hair with it if you need him to.” After retiring from construction in 1995, he returned to working the same land with his son-in-law, David, on the dairy farm until David’s untimely death in 2010. From that time on, he spent as much time as he could with his family. He remained wrapped around the fingers of his two great-granddaughters, Kinsley and Kastyn, until his very last breath.
He was preceded in death by Joe Lee Miller (Father), Velma Miller (Mother), Gloris Wallace Miller (Wife), Frances Miller (Sister), Edward Miller (Brother), and David Fuller (Son-in-law).
Survivors include Theresa Miller and Michael (Daughter), Helen Bourn and Johnny (Sister), Chris Fuller and Kacy (Grandson), Chloey Miller (Granddaughter), Brody Miller (Grandson), Zachary Miller (Grandson), Kinsley Fuller (Great-granddaughter), and Kastyn Fuller (Great-granddaughter).
Pallbearers were Chris Fuller, Steven Cothern, J.R. Johnson, Kevin Allen, Richard Cothern and Donnie Harvey.