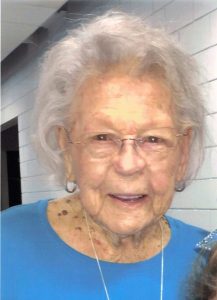 Funeral services for Alberta R. Bourn were held Friday, February 7, 2020, at Wilson Funeral Home in Monticello, with burial following in the Old Arm Cemetery in Silver Creek. Rev. Thomas Thurman officiated at the services, with Wilson Funeral Home in Monticello in charge of the arrangements.
Bourn, 101, of Silver Creek, passed from this life Tuesday, February 4, 2020, at Lawrence County Hospital in Monticello. She was born January 1, 1919, in Arm to Tom Rogers and Mary Parkman Rogers.
Ms. Alberta enjoyed gardening and working in her blueberry patch. She and her husband, Mr. Edward, were featured in the book “Welcome to Lickskillet”, which takes readers on a journey around the South through small, unique towns. Ms. Alberta also enjoyed baking from “scratch”. She was a host to many who would just stop by her house for a slice of whatever was on the table that day. She was a seamstress and quilter who made many outfits and pageant dresses for her family through the years. She told people around her that she lived to be her age because she “worked hard outside in the garden and didn’t sit behind a desk every day.” Her personality was welcoming to everyone and she will be missed by so many.
She was preceded in death by Edward Leon Bourn (Husband), Tom Rogers (Father), May Rogers (Mother), Thomas Bourn (Son), Donald Bourn (Son), Jackie Chance (Son-in-law), Thomas “Jack” Rogers (Brother), Mildred Barnes (Sister), Ruby Evans (Sister) and Hilda Ford (Sister).
Survivors include Patricia Chance (Daughter); Janis Bourn (Daughter-in-law); five grandchildren; Dr. Sherry Pippen and husband, Col. Lynn Pippen, Dr. Suzanne Chance and husband, Clayton Daniels, Mike Bourn and wife, Vicki, Donnie Bourn and wife, Joell, and Tamye Richard and husband, Joe; and six great-grandchildren.
Pallbearers were Kurt Bass, Harold Griffith, Mike Pritchett, Jimmy Thurman, Terrell Smith and Phillip Langston.
Honorary Pallbearers were Dickie Rogers, Dr. Richard Burris, Coyle King, Josh Bullock, Bro. Paul Stephens, Parker Langston and Mitchell Ratcliff.