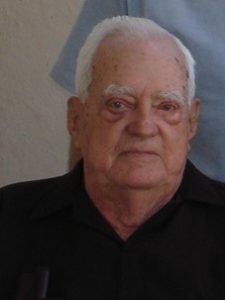 James Arthur “Brother Boy” Newsom went to be with the Lord on May 31, 2017. He was born to John B. and Myrtle A. Newsom on his parent’s farm in New Hebron on January 17, 1928. After graduation from New Hebron High School and completing two years of college, he joined the U.S. Army where he served as a gunnery instructor at Fort Sill in Lawton, Oklahoma, until receiving honorable discharge in 1952.
During his time in Fort Sill, he married Ms. Joyce L. Askin of Houston, Texas, and they remained a loving couple until her passing in 2008. After leaving the military he worked for the Houston Belt & Terminal Railroad, serving at various times as a switchman, job foreman and yardmaster. He remained with the HB&T until retirement in 1992.
In 1956, Brother Boy, along with his brother Fred Newsom and his father-in-law Ed Askin, started to build a home for his new family in Pearland, Texas. Once completed enough to occupy in 1960, the family moved in and construction continued until the house was finally completed.
Brother Boy loved the outdoors and spent as much time hunting and fishing as possible. He was a founding member and landowner in Price’s Creek Hunting Club in New Hebron and a member of the Keechi/Red Oak Hunting Club in Leon County, Texas from approximately 1970 until 1993.
In addition to Joyce, Brother Boy was preceded in death by his parents, John and Myrtle Newsom; his brothers, John B. Newsom Jr., Frank Newson and Fred Newsom as well as his sister, Peggy Rube.
He is survived by one sister, Genevieve Harris of Hazlehurst; one sister-in-law, Sylvia Newsom of New Hebron; two sons, Gordon and Keith Newsom of Pearland, Texas; two daughters, Donna Newsom of Pearland, Texas and Sandy Zatopek and husband, Jerry, of Fayetteville, Texas; three grandchildren, Joshua and wife Maria Zatopek of Marble Falls, Texas, Jacob Zatopek of Fayetteville, Texas and Julia Zatopek of Stephenville, Texas.
Visitation and funeral services were held on Monday, June 5, 2017 at South Park Funeral Home and Cemetery in Pearland, Texas.